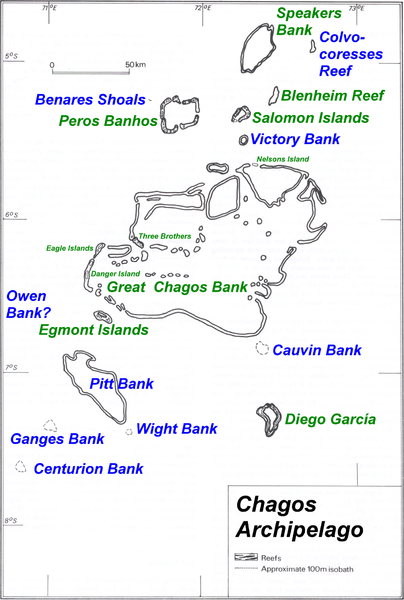 While the debate about what to do with the Chagos archipelago and its former population continues to rage, there are a few points about which all parties agree:

Why are environmentalists welcoming the declaration of the waters around the archipelago as a Marine Protected Area (MPA) and how might this provide the key to the long term solution?

Every Cloud has a Silver Lining

According to Greenpeace, many marine ecologists think that the biggest single threat to marine ecosystems today is overfishing. Following their controversial prediction that 90% of edible marine species will have collapsed by 2048, researchers have discovered that, in areas where the rate of fishing is reduced, even collapsed fish stocks can revive and become commercially viable again. Marine Protected Areas play a key role in preventing and restoring collapsed fisheries. The MPA around the Chagos Archipelago is the largest, so far, in the world but it has a another, perhaps greater, benefit.

Some consequences of the depopulation of the archipelago are that destructive farming, hunting and inshore fishing practices have been absent for half a century and that there has been no tourism development. As a result, the islands and the reefs around them are in such pristine condition that they constitute a unique resource of global significance and easily meet the criteria of a World Heritage site. Along with many other environmental organisations, we believe that the preservation of the archipelago for the future benefit of the world should take precedence over every other concern.

There are no indigenous people of the archipelago in the same sense that there were native Americans or Aboriginal people in Australia before their lands were ethnically cleansed by the British Empire and its successors. The Chagossians are the descendents of slaves from Madagascar and Mozambique, and lepers from Mauritius, brought there by the French from the late 1780s to 1828; and indentured labourers from India, brought by the British in the 1840s and 1850s to produce coconut oil.

When the islands were depopulated between 1967 to 1971, the production of coconut oil was no longer profitable and tourism was being considered. Between 1,250 and 2,500 people were displaced, mostly to Mauritius but a few to the Seychelles and the UK. Compensation was given to the Mauritian government but the Chagossian exiles received little benefit and, to this day, many live in slum-like conditions. Although many Chagossians and their children remain in Mauritius and the Seychelles, about 2,000 have left to settle in the UK, having been granted British passports.

Some Chagossians have successfully settled in the UK, but wish to exercise their rights to visit
the islands. The Chagos Refugee Group estimates that there are about 150 families in Mauritius that want to resettle on the islands. There are apparently 250 Chagossians in the Seychelles who want to exploit the economic potential of the islands.

Although the Chagossians do have a legitimate right to return, this does not give them the right to damage a site of immense value to the whole of humanity, current and, more especially, future generations. It is our view that all Chagossians and their descendants should be allowed to visit the islands. Chagossians who wish to stay on the islands could help in protecting the environment, however, they will require significant education and training in order to be able to perform this task. Therefore, we suggest that grants be made available for Chagossians who wish to pursue this option. We are pleased to note that the precedent for this has already been set.

There can be no doubt that the Mauritian Government's interest in the islands is purely commercial. Their economic potential is undeniable, however, any exploitation of that potential will inevitably lead to the devastation of the islands' current pristine state. When Britain declared the archipelago a Marine Protected Area, Mauritius refused to recognise it.

The corals and marine flora and fauna around Mauritius once rivalled those of the Chagos archipelago. Unfortunately, due to human over-exploitation, the only area resembling anything close to its former glory is the Marine Park in Blue Bay. However, it was only in 2008 that Mauritius declared it an official Ramsar site and still, the coast guards that are supposed to protect it are regularly observed illegally fishing in the park. A decade ago, ECOSUD, along with other concerned NGOs contended with the Government to prevent destructive tourism development within the park. ECOSUD was recently awarded a grant of $50,000 by the UNDP to help protect the park in recognition of the Government's failure.

Until the Mauritian Government demonstrates its desire and competency to protect the Chagos archipelago for the benefit of humanity, the marine park should continue to be administered by the UK or transferred to the UN. One way Mauritius could demonstrate that it can successfully fulfil its responsibilities to the rest of the world is by properly protecting the fringing reefs around the island of Mauritius. They are now in such a poor state that this can only be achieved by declaring the whole lagoon around the island a Marine Protected Area (with a few exceptions where the environment is consciously sacrificed for the sake of commerce). Then it must enforce a complete ban on fishing and severely restrict the use of motorised watercraft. The Government of the Seychelles puts Mauritius to shame by the responsible manner with which it protects its own waters.

By declaring the archipelago a Marine Protected Area, the British Government has implicitly rendered the rationale for the continued presence of the American naval base on Diego Garcia untenable. While America, like any other country, has the right of self-defence, it requested the use of the island as a naval base in a different era. The cold war is over and the USSR has disappeared.

There are no credible threats to America's global military supremacy and so it is impossible to argue that Diego Garcia is vital to defend the US. Indeed, it has recently been used as a launch pad for pre-emptive strikes on Islamic nations in the Middle East, notably Iraq in 1990-91 and 2003 and Afghanistan in 2001. It impossible to deny that it could be used in any potential military operations against Iran. The base has also been used by the CIA as part of its secret prison and torture programme in flagrant violation of international law.

The threats that the naval base presents to the ecosystem of the archipelago are immense. There is no doubt that the reefs around Diego Garcia have already been severely impacted but there remains a risk that accidental oil discharges from vessels using the base could affect other reefs too, perhaps this has already happened. As Diego Garcia is used for nuclear powered and nuclear armed vessels, there is the possibility of a radioactive leakage into the surrounding waters with potentially devastating consequences.